Used to Stripers caught on live bait were larger in size than Stripers caught on Lead Core and Umbrella Rigs. This morning’s outing on Lanier proved that the Stripers we caught were the opposite pattern. Bob bought his son-in-law Greg along, a Striper newby who fared to catch on quickly. We launched almost in the dark from East Bank ramp and while heading out marked several Stripers. We stopped the big motor and deployed the Ulterra. We put out 4 Downlines and 1 weighted Freeline into the 83.8° water and waited for the strike. No takers. We continued on to Bald Ridge Creek and again began marking Stripers. We put out the same spread and before you know it we were getting hit on all rods but apparently nothing sizeable enough to take down any of the lines except for one that Greg got into the boat. Good job.

As we checked the other baits we saw the typical Spotted Bass bite marks which killed our bait. So this is what live bait yielded us this morning. We continued our hunt with the Downlines near Shady Grove to no avail. I suggested we try some really deep Downlines in the river channel. On the way Bob suggested that we pull Lead Core to cover more area in our search. We explained the Lead Core technique to Greg and we were on our way. On one rod we used a Mini Mack with the blades and on the other we used a 2oz Capt Mack Chipmunk Jig with a paddle tail trailer. Within minutes it was Fish On. I took the rod out of the holder and handed it to Greg. He began his retrieval with the fish coming in from 8 colors out which was 240 feet. I put the boat in neutral as Bob reeled in the other rod. Greg had a good fight which lasted a while and successfully brought in a much bigger Striper. 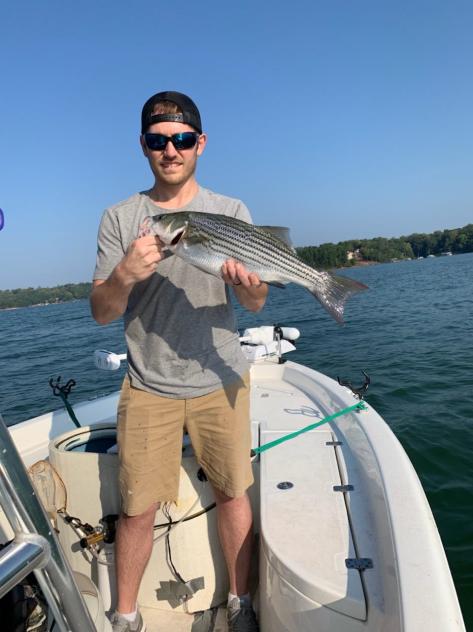 We contiued to pull the Lead Core almost all the way back to the ramp but there were no other takers.

One thought on “STRIPERS BIG or SMALL – We’ll Take ‘Em”