Used to Stripers caught on live bait were larger in size than Stripers caught on Lead Core and Umbrella Rigs. This morning’s outing on Lanier proved that the Stripers we caught were the opposite pattern. Bob bought his son-in-law Greg along, a Striper newby who fared to catch on quickly. We launched almost in the dark from East Bank ramp and while heading out marked several Stripers. We stopped the big motor and deployed the Ulterra. We put out 4 Downlines and 1 weighted Freeline into the 83.8° water and waited for the strike. No takers. We continued on to Bald Ridge Creek and again began marking Stripers. We put out the same spread and before you know it we were getting hit on all rods but apparently nothing sizeable enough to take down any of the lines except for one that Greg got into the boat. Good job.

As we checked the other baits we saw the typical Spotted Bass bite marks which killed our bait. So this is what live bait yielded us this morning. We continued our hunt with the Downlines near Shady Grove to no avail. I suggested we try some really deep Downlines in the river channel. On the way Bob suggested that we pull Lead Core to cover more area in our search. We explained the Lead Core technique to Greg and we were on our way. On one rod we used a Mini Mack with the blades and on the other we used a 2oz Capt Mack Chipmunk Jig with a paddle tail trailer. Within minutes it was Fish On. I took the rod out of the holder and handed it to Greg. He began his retrieval with the fish coming in from 8 colors out which was 240 feet. I put the boat in neutral as Bob reeled in the other rod. Greg had a good fight which lasted a while and successfully brought in a much bigger Striper.

We contiued to pull the Lead Core almost all the way back to the ramp but there were no other takers.

This is a late posting of my Striper trip with Bob on Thursday August 15, 2019. We launched at East Bank park at 6:15am heading toward halfway back into Young Deer Creek. We came upon spaghetti on a point just across from the abandoned community dock. We were on them so quickly we didn’t get a chance to put out any live baits as we sailed past them forgetting to use Spot Lock. When we circled back they were gone. We didn’t stay long and decided to head for Bald Ridge Creek. When we got there another boat was fishing right where we wanted to be but we found that we were over a lot of fish. We did use Spot Lock and put out 4 Downlines and 1 weighted Freeline. We started catching Stripers but losing them just as fast. We realized that the 10lb leader we were using was not strong enough so we switched all of the rods to 12lb and we started getting fish into the boat. We caught a total of 4 Stripers, two on Downlines and two on the weighted Freelines. The water temperature was 87.7° and we were Downlining just above and below the Thermocline which was at 32′. Our herring seemed to live longer at that depth.

We launched from Aqualand with the plan to be running Flowery Branch from the power lines to its mouth with Lead Core. We saw multitudes of Stripers but no takers here. Next we tried the main channel from the FB mouth to lake marker 18. Still no bites to be had. These two patterns had worked well in previous years with the same 85° water temperature. Since time was of the essence in the tournament it was time to change gears. We crossed over the lake to Vanns Tavern heading to the No Ski buoy in Two Mile Cr. As we passed the humps in front we got the Umbrella Rigs out. Looking at the screen we were on spaghetti. It was hit after hit boating a Striper on each pass. They were taking both the white & chartruese colors. Unfortunately all of the Stripers we caught were no longer than 22″ and it would take at least two fish 28″ to place in this tournament. 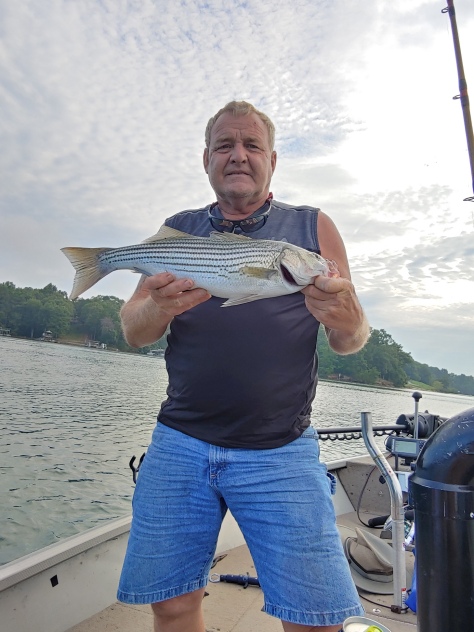 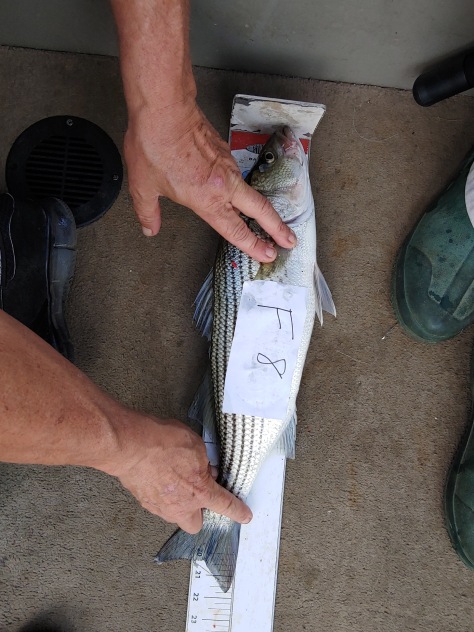 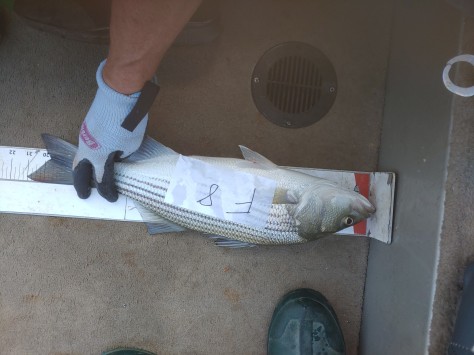 Needing some bigger kickers we decided to head to the Flowery Branch bridge but were run out by the boats popping out from Hideaway Bay marina. With little time to send the photos to the virtual weigh-in we headed in to get off the washing machine of waves. Thank you Charlie Perkins and Don Finfrock for the assist.

Those recent rains turned the water temperatures down again slightly and while they were back on the increase it was Fish On today. Bob & I caught 9 Stripes this morning 20′ down over a 25′ bottom in 80° water temperature. Rods were going down left and right until we ran out of bait. No telling how many we lost. We were down to one Blueback in the tank so we cut it half and both of us tried to catch one more each using the cut bait method each holding a rod. We even caught one Largemouth bass.

Another 72° morning at 6am started today’s search launching at East Bank ramp again. Today we were to search different areas so we began where the Big Creek channel meets Shoal Creek. The water temperature was 82.7°. Weatherman said 7 mph winds today and it had already started at 3 mph. After not seeing anything we headed for Three Sisters but changed our direction when we spotted 4 Striper boats close to Shady Grove campground. We pretty much skirted the other boats so as not to horn in on them. We did not see anyone catching anything. After a few minutes each boat started to move out. Whatever was going on here we missed it. We hung around the island in Six Mile seeing several marks down 50 feet but no takers. We also left that area to the remaining boat and headed further into Six Mile Creek. With no luck in open water it was time to head into the creeks. We finally found some Stripers in 50′ of water and they were staggered from 8′ to 38′. As luck would have it we started catching and Bob landed a 28 ½” Striper on a Downlined herring. It was an exciting fight. 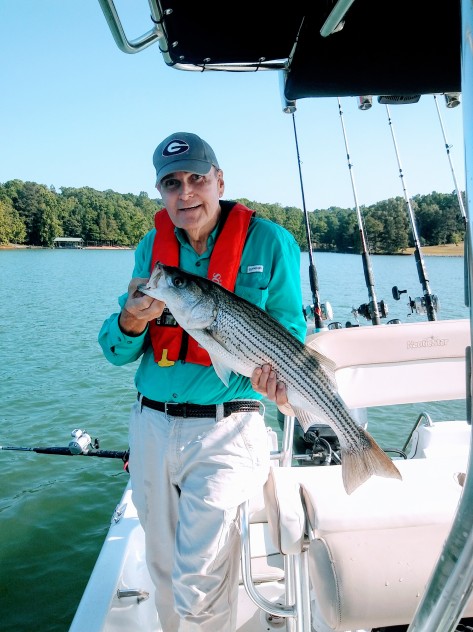 We kept circling the area as the marks became consistent. I brought in a Spotted Bass then Gary hooked another 28” Striper.

We missed a couple more hits then we got a couple more Spots. The bite shutdown after that around 11am. We decided to call it a day. As we approached the main channel we saw the waves white-capping. Needless to say it was a rough ride back to the ramp occasionally slowing to crest over the waves.

Today the air temperature was to start in the high seventies at 7am. We got our 3 dozen herring at Oakwood Bait & Tackle on McEver Rd. My plan was to use Downlines early then change off to Lead Core. While it was a little early in the season for Lead Core the late May and June temperatures were well ahead into the eighties so that meant pushing the methods in my monthly logs forward. We launched at East Bank and pulled a couple of herring on Freelines from the ramp to the mouth of the bay. The water temperature was 82.7 degrees. We did see some marks but there were no takers. Reaching the mouth of the bay I added a couple of Downlined herring and headed out to the main lake humps. Our first Striper hit on a Freeline. The next couple of Stripers came on the Downlines so we switched the two Freelines to Downlines. This Striper was 26 1/2″ long. We used the Seaqualizer to release this fish as we had it out too long for pictures and his survival rate was slim in the now 83 degree surface temperature. He was released 40′ down.

We saw a multitude of marks beside the humps but only on the west side of them. After getting a couple more into the boat the Downline bite shutdown. It was time to get out the Lead Core. We targeted the 24 to 28 foot depth and let out one Lead Core at 5 colors and the other at 7 colors at 3 mph. Within minutes it was Fish On.

Gary pulled this 23 3/4″ Striper in on one of the Lead Core lines that had a 2 oz. Capt Mack’s jig with a chartreuse swim bait trailer. We pulled the Lead Core for another hour and a half but the bite was over. Gary had to leave by noon so we headed back to the ramp.

With only 2 people in the boat and multiple lines going down it made fishing today a little chaotic. But I guess that’s a good thing? We needed just one more in the boat to keep track of which lines were being hit and bending into the water at the same time over and over. No sooner than we got the first line in the water we got hit. It was a single 4 pounder just before Prather Bridge and then a double just past the second bridge.

I brought 11 rods and some were on the floor of the boat, some were leaning against the gunnel either needing another bait or maybe a hook. We still managed to get 6 Hybrids into the boat. No telling how many we lost. We did get a few Spotted Bass, however they were stealing our Bluebacks left and right. With all the Hybrids hitting and the swarms of bass we actually ran out of bait. The ticket to getting these Hybrids again today was still the Carolina Rigged Downline. The weather was fantastic and about 77°, no wind, just blue skies and budding trees.