The Pirates of Lanier Poker Run was to start today at 11:30am so all the folks fishing needed to get lucky before the cigarette boats would go flying by at extreme miles per hour. Today’s plan was to fish the channel right in front of Port Royale on a clean bottom and be done by nine. We started downlining at 6:30 and managed to boat only one striper out of several quick hits. 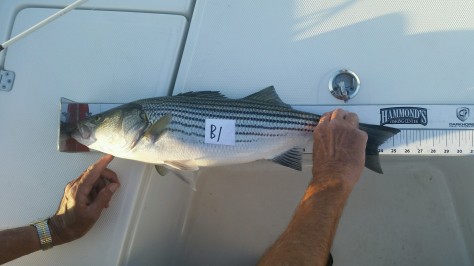 As the sun aimed down on us just clearing the tree tops across the channel by Mountain View, we started to see more and more boat activity around us and made the decision to leave the area and pull Lead Core. We began just south of Browns Bridge on the west side of the channel. I first hooked up with a fish and while reeling it in my partner was to grab the other rod and start reeling to get it out of my way. It seemed like forever for him to bring in the line so I turned and asked him if he had gotten the line in yet and he said “I think I’ve got a fish on too” just as the boat passed under Browns Bridge with wave after wave from boats passing us on all sides and water crashing over the bow, we had our first double on Lead Core. Around 10:30 the sun decided to give us a break and move behind the clouds. At this point I changed the 4 1/2″ paddle tail color we were using on the 2oz Bucktail Jig from Lime Ice to an 8″ blue and white paddle tail. I also added a noise pellet to one of them to further get the striper’s attention. Well this was the right call as my partner said. 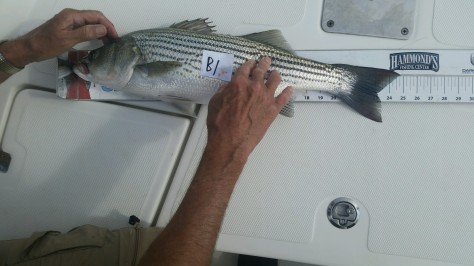 We caught six more stripers. While this was an “inches” tournament we were unable to get more than 50 inches with 2 fish. The lake was getting overwhelming now so it was time to cross the churning river channel with big and little boats coming from all directions and get to the quiet safety of Balus Creek. We started pulling again and managed to boat one more striper for a total of 8 on the day. I had loads of fun, caught a lot of stripers, made a new striper record in Bob’s new boat of 8. It was time to head in and get to the weigh in at OBT. Eleven boats fished the tournament and we tied for fourth. Another great day fishing for stripers.