My great nephews Vinny and Sonny caught their first fish today. I brought crickets and red wigglers. Sonny was in charge of the worms and we baited his rod up. Vinny remembered how to cast and started fishing with crickets. As soon as Sonny’s line hit the water it was fish on. Because of the initial surprise we lost the first one not setting the hook. Vinny wasn’t doing well with crickets so we switched him out to worms too. After just a few minutes Sonny had his first fish on.

He reeled it in struggling with the railing that was a tad too high for him even with him on the step stool. No matter this fish didn’t getaway this time. Vinny came over and fished the exact spot Sonny was in while we baited him up and voile fish on. 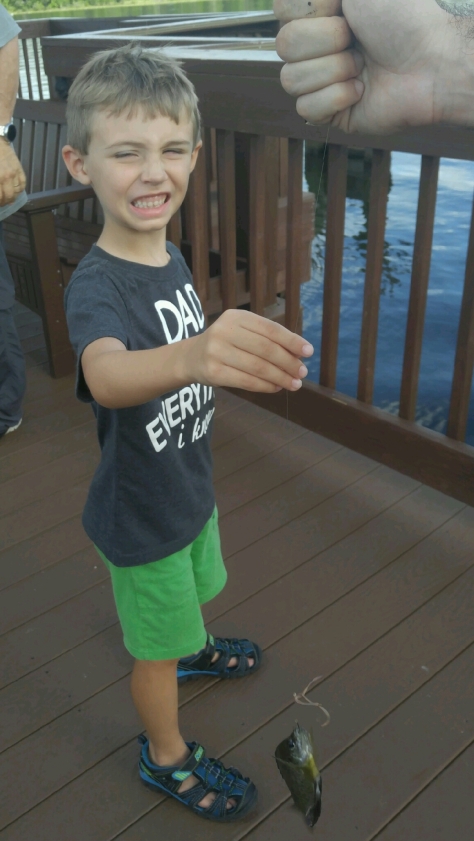 Vinny reeled in the next fish all excited. That’s 2 Blue Gills so far. Sonny wanted to release his fish so I removed the hook and handed Sonny the fish. He held it in his hand for about 10 seconds until it wiggled and he dropped it on the dock watching it doing the fish dance. I picked it up and Sonny held on this time and released it. I let him go.

Sonny and Vinny caught one more fish each. There were big smiles for the cameras. And as my sister Lynn always says let’s quit on a good note so we packed up everything and left to enjoy the rest of the day with good memories fishing with Great Uncle Steve.