With a little bit of wind and a plethora of boats on Lanier today it was a bit rough on the water. We left Vanns Tavern ramp at 7am and headed for the Six Mile crossroads. Surface temp was 89.1°. Bait care would be of great concern as Blueback Herring need 50-65° in the bait tank to be lively not just alive and we would have to drop the bait quickly to our desired depth which was 40 to 80 feet over a 100′ bottom, else the bait would die in less than a minute on the hot surface. I kept checking the bait tank temp for the next 40 minutes adding ice until the temperature stabililized at 62°. We staged four rods in the rod holders with enough line to get them 60 to 70 feet down holding the hook at the gunnel. Using the bait net we hooked a Herring and released the bail so that the bait plummeted downward immediately with the help of the 2oz. pencil weights. We had a couple of nice Stripers on within 10 minutes.

We took some pictures and realized with the hot surface temp the fish were not going to make it even with the seaqualizer. So I threw them on ice to be fileted later. We decided to move out to find a little cooler water finding 84° between the last Three Sisters island and the mouth of Big Creek not very far where we just were. By this time more boats were cruising in all directions and the wind picked up causing the water to be like a washing machine. We remained successful with our Downlines and caught 2 more smaller Stripers releasing them to the water torpedo style. 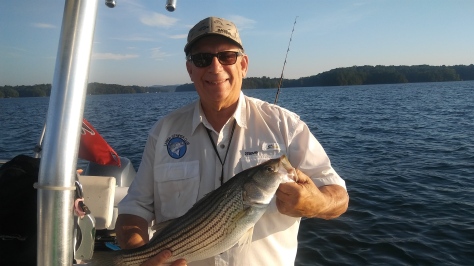 We were almost out of bait. I should have brought 3 dozen instead of two. We were also low on fuel so we headed to the gas dock at Holiday Marina. On our way in we came upon a center console barely moving. We thought they were fishing but realized they were not under much power. We slowed near them and they told us they ran out of gas and that the trolling battery was almost dead. So we towed them to the gas dock which is where we were headed. After grabbing some ice to put on the two Stripers we kept, we decided to grab some lunch at the Twisted Oar. We ran into some club buddies that had been successful pulling Umbrella Rigs. They said they tried some Downlining but with no success. They had five Herring left so they gave them to us. Well our bait soon ran out after snagging some trees. It was either quit and go home or get out the Lead Core rods. We used 2 different color 2oz. bucktail jigs and trailers, one pink and one chartreuse. Since the Stripers were down deep between 40-80′ we needed to seriously change our Lead Core presentation by decreasing our speed from 3 mph to 1.5 mph which would drop the baits to 36-40′, out 9 & 10 colors respectively. After a couple of hours the lake was seriously rougher than when we started. We decided to head back to the ramp to end the day.