We wanted to fish the humps near the dam this morning for some downlining fun with Pretty Boy Tree Guy Charlie Perkins and Lynn Gregory. We had just launched from East Bank ramp, got passed the no wake buoys and throttled up to plane off when I noticed the Lowrance screen light up with fish. I eased off, deployed the Ulterra and set it to anchor while we got our downlines ready. We followed our track back through the fish but no takers after 10 minutes and there were plenty of large arches. Today’s striper plan was to downline the drop offs near the humps at the dam. When we got to the humps there were plenty of arches all around. We put out two downlines then two more with a freeline herring. After a few minutes Tree Guy got one in with Lynn netting his game.

While we thought that we would be getting on them it was frustrating to be all in them and nothing more to show for it. We went to plan bee which was pulling Lead Core. I put on the reliable white trash paddle tail swimbait on a 2oz bucktail jig and headed toward Shoal Creek. As we were nearing Sunset Cove a striper hit our white trash Lead Core and Lynn brought him in. 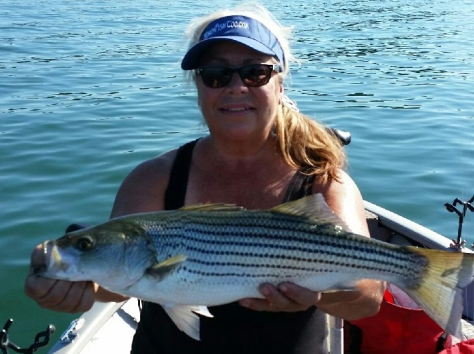 After that we went back to the humps by the dam but we weren’t seeing as many stripers as before. We decided move toward the dam and came across several stripers stacked up. We tried downlining, jigging with Ben Parker Junior and the larger shattered glass spoon and some top water but no takers. We decided to call it a good day and headed back to the ramp. GO TEAM LANIER