Thursday morning June 16th I took my great nephews Vinny and Sonny on their first fishing trip. We went to Colt Creek State Park in Lakeland Florida. While it was hot and no bites to be had Sonny the 4 year old asked if he could touch one of the night crawlers. I said sure but they’re slimy. After he touched it he said ewe. Next thing I knew he had one out of the container and was playing with it. Vinny the six year old on the other hand was squeamish about them and dodging his brothers attempts to wrap the night crawler around his legs. When it was time to leave I told Sonny to ask the others who were fishing if they wanted our leftover bait. He took the red wigglers and night crawlers over to them. They thanked him for the bait. As we neared the car I noticed that Sonny still had one of the night crawlers in his hand. 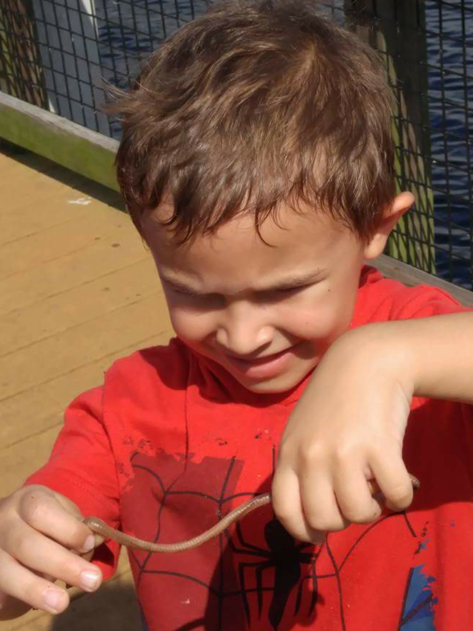 I told him that he needed to leave the night crawler here as it would not survive the trip home. He started to cry because he didn’t want to leave his friend behind. I took the worm and placed it under a rock so the birds wouldn’t get it. At the car were hugs and tears for good byes. A few photos with the rods and the end to a great 1st fishing outing with the great nephews Vinny and Sonny.