Watch the video
On the last day of 2015 with most of the lake ramps closed and the lake full of debris due to the recent overwhelming rains, Team Lanier decided not to launch a boat but to go Crappie fishing on the docks of Gainesville Marina. Determined and almost having to walk on water, Duggan and Dale maneuvered across the sunken walkway to make their way to the various slips on Dock 9. The results were three Crappie. Earlier we decided to fish Dock 4 because the walkway wasn’t underwater. I dropped a minnow into two slips opposite each other laying the rods on the platform then while dropping in the third rod in an adjacent slip each of the first two rods suddenly started moving towards the water at the same time. Apparently a large spot or a striper grabbed one of the minnows and swam by the other line hooking the other rod. I was able to grab the other rod before it too went into the water. After wrestling the hooked fish with 4 pound line, it snapped and I ended up losing a spinning combo. I never liked that combo anyway. The catch on Dock 4 was a small striper and two Crappie caught by Jim Duggan. 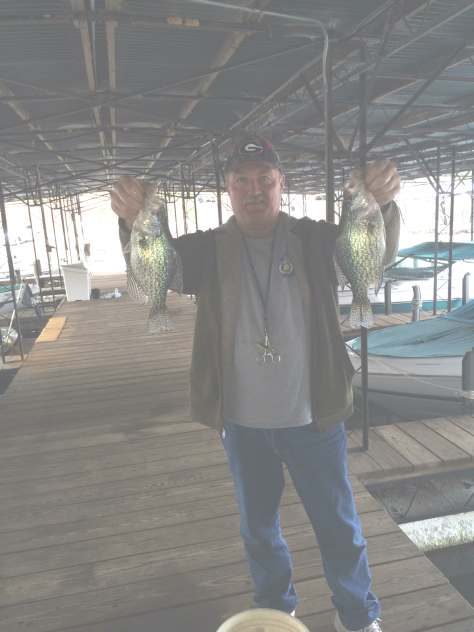