It was rough out there today. The morning started out with a dense fog warning, low cloud ceiling blocking the full moon then sunrise.

We chose to launch at the fifth ramp at Aqualand because there was water enough to access the courtesy dock and still be near the main channel saving time as we headed to Flat Creek. Well the dense fog curtailed that idea as we could only go 8 mph towards our starting position. 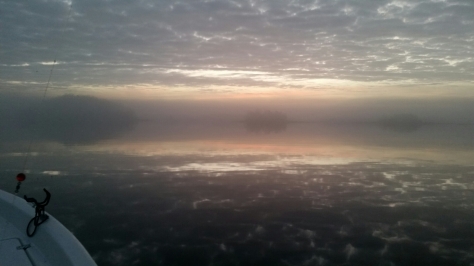 The Oakwood Striper Club tournament lines in was 7:30am and we now would get a late start. Upon arriving in the very back of Flat Creek it wasn’t so much that it was a parking lot yet for boats but we counted well over 12 boats and only 3 striper fishing including us. We had to keep turning with our spread to avoid nearing some of the boat’s that were in a Spotted Bass tournament. Known by experienced anglers too many boats crowding around each other creates too many sonar pings which affects fish. That’s probably why we saw so many fish on the screen and no other boat seen catching anything in any including us. We left this area and started to pull Umbrella Rigs near the mansion at Balus Creek and was able to hook up with a good size Spotted Bass. We continued into Balus heading for my “go to” Spot which was an underwater plateau near deep water. While a dangerous place to pull a 9 hook rig you just have to have your eyes glued to the chart to avoid getting too near the shallows. No luck here today. With time running out we headed to 3 Sisters for one more all out try since weigh in was 45 minutes away. When we got there we took a minute to look around to see the water was calm, no other boats around, no wind, a picture perfect day and felt the warmth of the sun on us.