The same pattern worked again today fishing in 58° water around 1pm. We were pulling boards and free lines with medium shad when we both heard that familiar zing sound that reels make when a fish is on. We looked around to see which rod went off and couldn’t tell as none of the planers were tripped or any of the lines were moving at all. I told Bob to pick up one of the planers and reel slightly and sure enough it was the right one because the planer board buried itself beneath the surface. At one point the striper cleared the surface for a brief second before taking off again going deep. Bob turned to me and handed me the rod and said “your turn”. I grabbed the rod as the striper continued to strip line out of the reel. Give and take, give and take, adding drag a little at a time. I finally saw the planer board and the shad still running up the line. This fish still wasn’t ready to come in as it turned and went toward the motor. Partner told me not to worry as he dipped to net the fish and it bent the hoop of the net as he raised it into the boat. After measuring it at 32 ¼” and taking pictures the striper was back in the water to be caught another day. 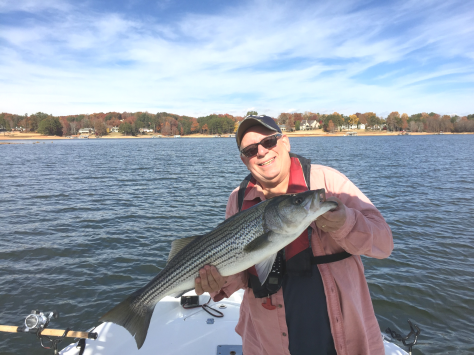