After a 5 lb spot gets one of our last Gizzard Shad, and a nice striper gets caught in Charlotte’s web (see the video), we managed to catch a black throated Loon that ate one of our Bluebacks and a Gizzard Shad before getting tangled in a third downline. We were over a 120 ft bottom, fishing an elongated bait ball 80 ft down. The spot must have knocked the shad off the hook while trying to eat it and got hooked in the process. After the striper was boated in 20 mph wind gusts it took us a while to undo all of the tangled lines after spinning round and round trying to net the fish in the wind. Later on our third attempt to downline over the channel in front of the Port Royale no wake buoys is when the Loon action began. One downline started screaming off the reel like a striper on. When we realized the fish got off, another downline began ripping off  line, then a third rod bent over the gunnel. This time we were able to see what was causing all of the commotion after it broke the surface. It was the black throated Loon. (see the video) Reeling like crazy and moving the boat towards the Loon, we cut the line after the 4 oz weight which would give the loon a better chance at survival. We saw him dive with a Blueback stuck to his back. Later we saw him surface again with nothing clinging to him. He and his mate dove down again. We called it a day after that. 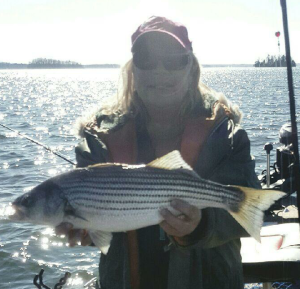